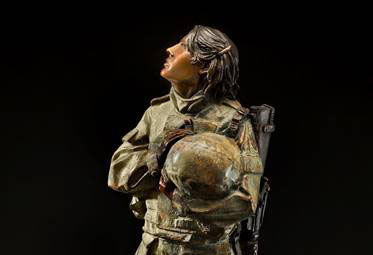 “I strive to design the elements of my patriotic sculptures into works that capture the courage and determination of brave men and women. Not as static sculptures, but as a dynamic statement about service to humanity. The focus is not on war, but to honor the courageous quest for Truth and Freedom, with special emphasis on Duty, Honor, Courage, and Country.”

“Athena” is the classical goddess, not only of War but also of Wisdom, Courage and Strength. A modern Athena, just returned from Battle with the enemies of America, her helmet held pro

tecting a heart of female compassion as she looks Heavenward in Prayer. She symbolizes the feminine “balance” to war.

curate, as are all of James historical pieces, it is designed to beg the enigmatic question of what is her Prayer – the answer to be supplied by the viewer as a catharsis for helping to heal the individual, and very personal, “wounds of war.” As always, there are many symbolic features incorporated into, the figure and the base presenti

ng an allegory of the role of women in war.

This concept was originally conceived by James after a series of discussions with a female Soldier, Tiffany Kravec in 2013, who served two tours in Iraq. Her desire for contacting 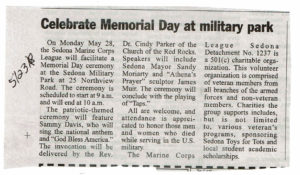 James was that he would one day create a memorial recognizing women who had served in Americas Armed Forces. She sent pictures that reflect the reality of war, the need for compassion, and its impact on women, children, and all soldiers. She is one of the many hundreds of women who have served, and are still serving, in America’s Armed Forces. Inspired by the concept, James completed his study of “Athena’s Prayer” in 2014. The life-size, completed this year, is a piece that James personally feels pays long-due tribute to American Women in recognizing their role in our Armed Services.