What is the Jack Jamesen Memorial Park?

In the mid 90’s local builder and developer Dave Blauert donated a parcel of land to the City of Sedona. He was mourning the loss of a friend, Jack Jamesen, as were several other service-oriented men in the community. Jack had been an original founder and a big supporter of Sedona 30 and a contributor to many additional service organizations in the Verde Valley, and so, the “pocket park” was named after him.  “We as family are eternally grateful, that such a lovely sculpture garden has been created and dedicated to citizens who care about service to others. I know my father Jack would be greatly honored that the park will carry on his name and passion for humanity.” –stated Jill Galea, Chairperson of the Honoring Women Committee of the park.

On March 1, 2014, The Sedona Military Service Park was unveiled in the Jack Jamesen Memorial Park and dedicated to the City of Sedona. Applications continue to be accepted for inscription on the granite walls and all details are available at the city’s website: www.sedonaaz.gov. Granite walls, benches and flags honoring all five branches of the military are visible from State Route 89A and occupy the front section of the Jack Jamesen Memorial Park. The Sedona Marine Corp League and Sedona Korean American Association sought support from local clubs and organizations, including The Sedona 30 and made this section of the park possible. This area of the park honors local men and women who have honorably served our country during peace and war.

The original landscape architect, Dick Hubble, designed the park with separate featured areas of the garden in mind. The Honoring Women Committee began meeting in February 2014 to create a section of the park for that purpose. This area includes a bronze sculpture by James N. Muir, titled, Cornerstones of Freedom, and green granite walls on either side in honor women who have made contributions and indelible impressions on those dear to them. Applications are currently being taken for those inscriptions and all details are available at our “Be A Friend Page”.

Today the park is a jewel in the center of West Sedona. It also includes a North American Indian sculpture by John Soderberg, Ph.D. titled, Invocation, a bronze relief of Jack Jamesen by Sculptor Leslie B. DeMille and a plaque listing the original contributors and service clubs that have supported the Park since its inception. The Park has room for five more sculptures and areas according to the original site plan.

“Both of my parents, father Jack and mother Gail, loved beautiful Sedona, and they both believed in the intrinsic value of service work, supporting one’s community in whatever ways an individual is able.”  Jill added, “Whether it be time, treasure or talent, a community is only as strong as the commitment of its citizens to support It. It gives me heartfelt pleasure to honor my mother, along with the other women on the granite walls, it is a lasting legacy that they each deserve for their contributions to our community and to the world.” 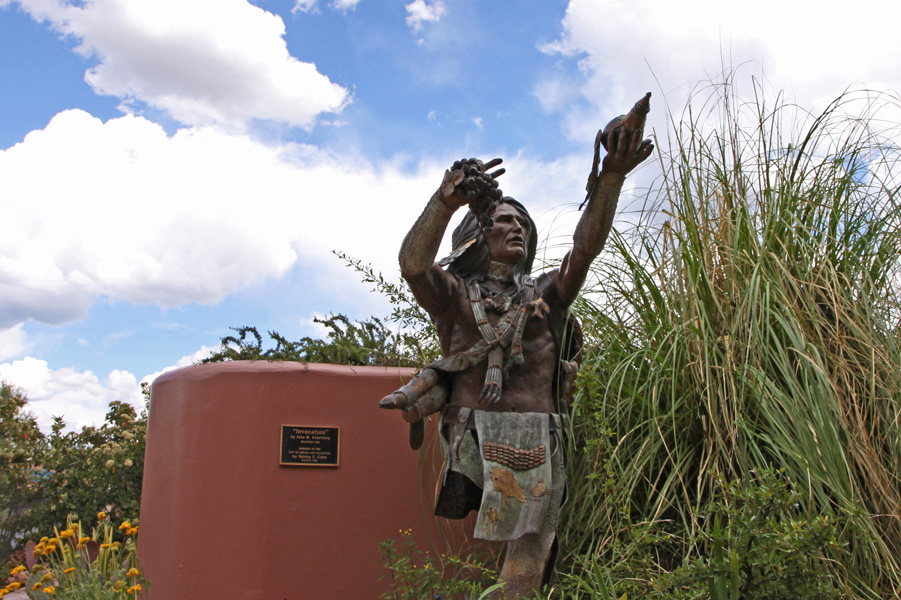 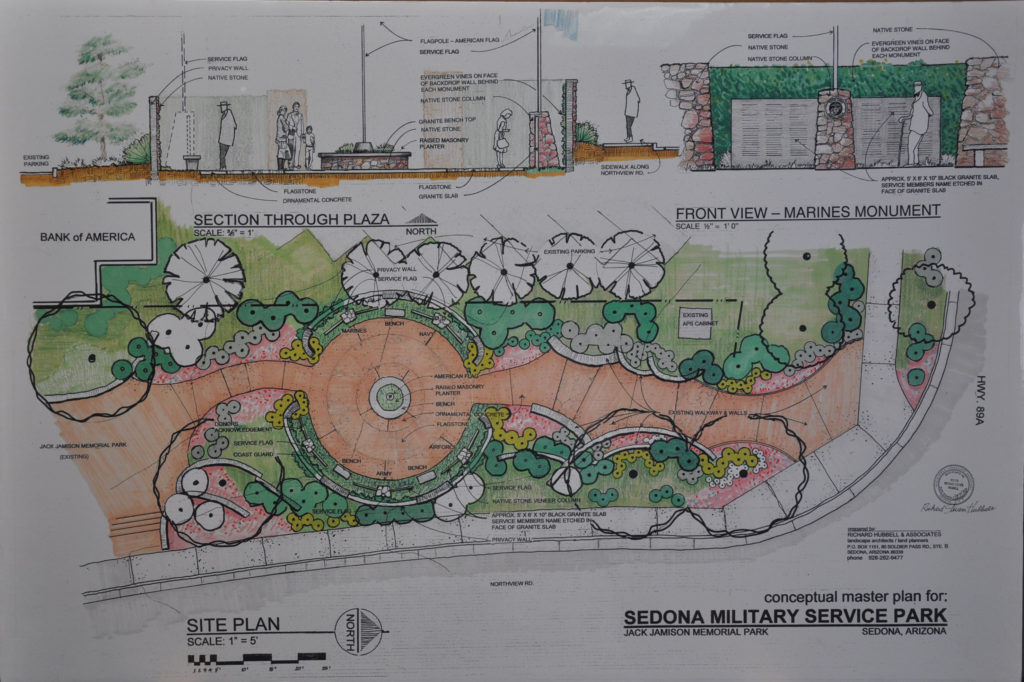 “To me, art is not a luxury, but is a basic human necessity. Art can, and should, remind us of our humanity, and that of others, and enhance the quality of our lives. From the earliest artists, Stone Age storytellers around a fire in a cave, to the painters and sculptors and architects of today, art has pervaded and shaped our societies. To me, an artist is not primarily a creator, but is rather a conduit—absorbing, translating, and conveying messages of value to others, living or centuries yet to be born.”

John lives and works in the Sedona, Arizona area. His daughters, Heather and Misty, both noted professional sculptors, work with him on all of his monuments. They each began spontaneously sculpting at age one, turned professional at age two, (at their own choice,) and were featured on Paul Harvey News, People Magazine, National Geographic World, That’s Incredible T.V., and other media, and showed their work in galleries in Scottsdale and Houston, all before eight years of age, and all before their father achieved any professional success, whatever.

Click on any of the images below to view more. 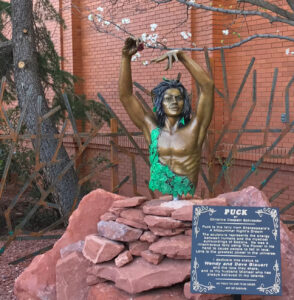 by Christine DeSpain Schroeder
unveiled in 2022 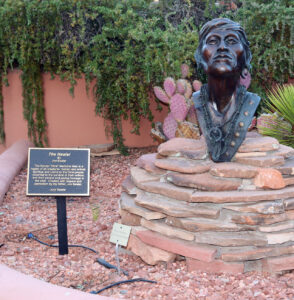 by Joe Beeler
unveiled in 2022 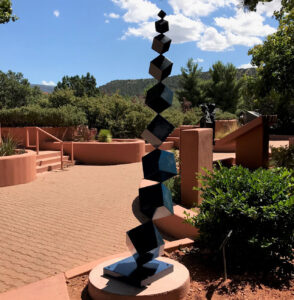 And The Spirit Soared 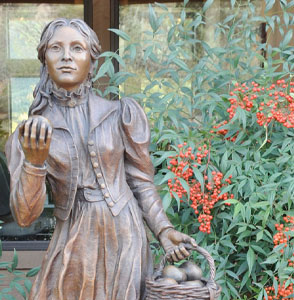 by Susan Kliewer
unveiled in 2017 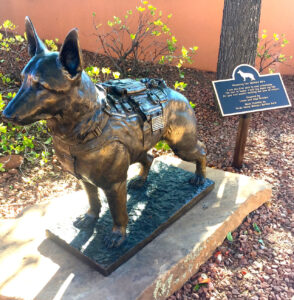 by Lena Toritch
unveiled in 2016 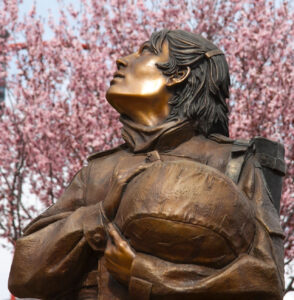 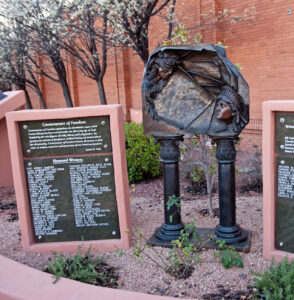 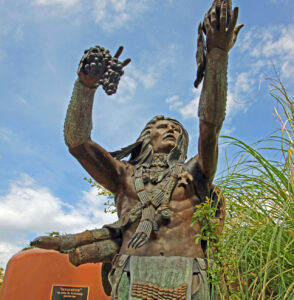 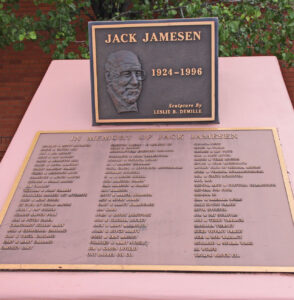 by Leslie B. Demille
unveiled in 1996